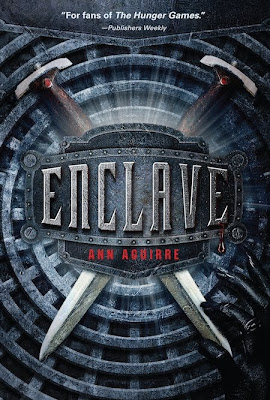 “In her first young adult novel, Aguirre (the Sirantha Jax series) has created a gritty and highly competent heroine, an equally deadly sidekick/love interest, and a fascinating if unpleasant civilization. This series is likely to hold considerable appeal for fans of The Hunger Games.” — Publishers Weekly

Ann Aguirre is an author with a great way of writing in a tone that adults and young adults will both enjoy. Her transitioning each chapter smoothly and without and bumps, keeps the readers hanging on each word and waiting for more.

Through the first portion of this dystopian book, we do not know why enclaves are underground. The underground enclave the main characters live in full of horrors and survival instincts I never wish to experience in in real life. I don't want to spoil the surprise, but these descriptions remind me of a cross between "Beneath the Planet of the Apes" and "The Stand."

Zombies seem be be on the rise in many YA books, but the Freaks in this book feel much more terrifying. This post-catastrophe world is full of good and evil, killers and saviors, and the weak and strong.

I could not put this book down, reading it the day I received my copy in the mail. (This book was an ARC from the publisher, but I receive no compensation for this review.)

I certainly hope this is the beginning of a series because I want to know more about Deuce (Huntress and lead heroine), Fade (Hunter), Tegan and Stalker (both topsiders).
Posted by Unknown at 4:40 PM No comments: 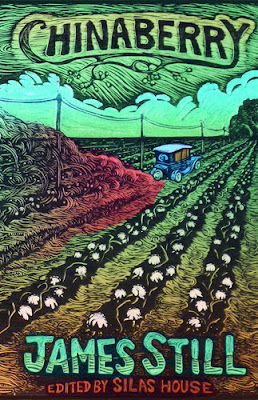 CHINABERRY Manuscript by James Still and Edited by Silas House

A classic story of adolescence by the late Still (1906–2001; River of Earth) pursues migrant workers from Alabama to an East Texas ranch. The 13-year-old narrator has accompanied his father's friend, Ernest, and two young men to Texas looking for work; the barefoot boy is small for his age, and as they pass through an East Texas town, he attracts the attention of a wealthy farmer, Anson Winters, who invites the four of them back to his Chinaberry ranch to stay and work for the summer. Anson lost his son several years before and has not gotten over it; also a widower, he has remarried the lovely Lurie, though in three years of marriage they still have no children of their own. The narrator is installed in Anson and Lurie's bedroom and otherwise spoiled, evidence of Anson's transference of affection to the boy, while Lurie intimates that she and the boy are mere substitutes. The reader is never quite certain where Still is leading—editor House wonders about this in his helpful intro—which leaves a heavy feeling of unfinished-ness about the project, but there are small nostalgic pleasures to be found in reading this simple story of Americana, directly told.


James Still (1906-2001) was and remains a Kentucky icon, also known as the “Heart of Appalachian literature.” Still left a legacy for the coming generations with his rich collections of novels, short stories and poetry. He also left a mysterious manuscript in an older leather briefcase. Still's literary advisers and adopted daughter, Teresa Reynolds, wanted to see this book published, so they asked Silas House to edit the manuscript.

Although Chinaberry is a slim book, it takes us on the journey of a 13-year-old boy, who leaves Alabama and his family to spend a summer picking cotton in Texas. Many people think this young boy was actually Still reliving three months of his life, but this question remains unanswered.

House tried to stay as authentic as possible to Still’s manuscript by providing transitional sentences. He also rearranged the chapters to make them flow with consistency. House did an amazing job in taking on this difficult challenge.
Without giving away too much of the story, the main relationship is between the boy, who goes to Texas and the Chinaberry ranch's owner, Anson Winters and his second wife, Lurie. Anson virtually adopts the boy, treating him as a replacement for the young, handicapped son whose death he still grieves.

This book ranks up highly with Still’s best written book, River of Earth, published in 1940. Chinaberry is the best book I have read this year and I hope everyone will be able to see two masters at work.
Posted by Unknown at 11:12 PM No comments: