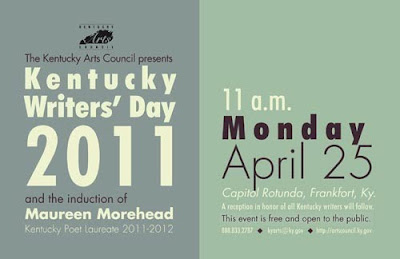 The Tourism, Arts and Heritage Cabinet

The event will start at 11am EDT, April 25, 2011 at the Capitol Rotunda in Frankfort, followed by a reception on the mezzanine level. This will be an excellent opportunity to congratulate Maureen Morehead and to meet fellow writers.
Posted by Unknown at 7:50 PM No comments: 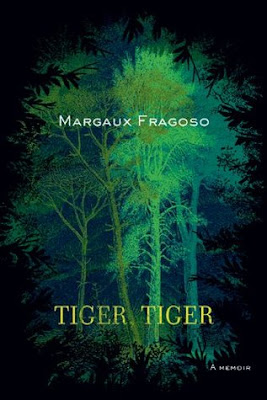 Starred Review from Publishers Weekly. In this gut-wrenching memoir of sexual abuse, Fragoso, who has written short stories for various literary magazines, explores with unflinching honesty the ways in which pedophiles can manipulate their way into the lives of children. Fragoso met Peter Curran at a public pool in Union City, N.J., in 1985 when she was seven and he was 51. He seemed harmless, and invited Fragoso and her mother back to his house. This marked the beginning of Curran and Fragoso's 15-year relationship, which ended when Curran committed suicide at age 66. Fragoso's home life was strained—her mother was in and out of psychiatric wards and her father was an alcoholic—and Curran's home, with its myriad pets and lack of rules, became her refuge. The sexual abuse began slowly, progressing to oral sex in Curran's basement, an act that he requested as a "birthday present." Fragoso's sense of alienation—Curran controlled her world for more than half her life—is palpable in her telling. Using her own diaries and the myriad letters, diaries, and photographs Curran left behind, Fragoso eloquently depicts psychological and sexual abuse in disturbing detail.

One summer day, Margaux Fragoso swam up to Peter Curran at a public swimming pool and asked him to play. She was seven; he was fifty-one. When Curran invited her and her mom to see his house, the little girl found a child’s dream world, full of odd pets and books and music and magical toys. Margaux’s mother was devoted, but beset by mental illness and frightened of her abusive husband; she was only too ready to take advantage of an escape for the daughter she felt incapable of taking care of on her own. Soon Margaux was spending all her time with Peter.

In time, he insidiously took on the role of Margaux’s playmate, father, lover, and captor. Charming and repulsive, warm and violent, loving and manipulative, Peter burrowed into every aspect of Margaux’s life and transformed her from a girl fizzing with imagination and affection into a deadened, young-old woman on the brink of suicide. But when she was twenty-two, it was Peter—ill, and terrified at the thought of losing her—who killed himself, at the age of sixty-six.

With lyricism and mesmerizing clarity, Margaux Fragoso has unflinchingly explored the darkest episodes of her life, helping us see how pedophiles work hidden away in the open to steal childhood. In writing Tiger, Tiger, she has healed herself of a wound that was fourteen years in the making. This extraordinary memoir is an unprecedented glimpse into the heart and mind of a monster; but more than this, it illustrates the power of memory and truth-telling to mend.
Posted by Unknown at 9:02 PM No comments: