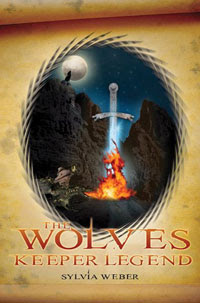 From the back cover: “…. From the beginning of time, it seemed that rivalry between man and wolf was at the root of man’s dislike for the animal, discovered only too well by Sealgair. Was his fate forever to be condemned to isolation, to see terror and hate in the eyes of the once he once loved? All he could see in his mind was the last pictures of Awena’s beloved face, which he carried in his heart for all his life.

Was the only way out to discover the special secret held by the papyrus-pearls in the stone pot – what secrets could this hold? And which stone pot could keep that precious secret when there were so many of them?

Seanns’ quest to find the pearls and uncover the secret ended with tragic consequences, resulting in him not only discovering the truth of his birth and who his real mother and father were, but the realisation that his father lived among the wolves…”

The Wolves Keeper Legend is a young adult fantasy novel, so naturally it comes with its own vocabulary of places and characters. There is a vocabulary list in the front of the book with definitions of some words, as well as a character list.

Sealgair and Awena are two lovers cursed by a jealous sorcerer, Fiosaiche. Fiosaiche longs to win Awena's love, but even with Awena's vanished memories, she will never love the sorcerer.

Seanns is a young boy who has an unexplainable love of wolves and develops a deep "motherly" affection for Awena. Because of his affections for Awena, Seanns goes on a quest to locate a papyrus-pearl in a stone pot - supposedly this pearl will help lift the curse from Sealgair and Awena. Seanns sets out on his quest with Maise and Cibeir - after all, what quest would be complete with travelling companions?

I had some trouble getting started with this story, but after the first few chapters, the unusual vocabulary became easier to read and the story flowed better. I thought the characters were developed well and descriptive. I also had trouble determining the main theme of the book. I have a feeling this book was setting up the opportunity for future sequels. In that case, I will be interested to see where the story goes.

I would recommend this book for middle-grade children to young adults, especially to boys. Seanns is a typically mischievous boy who means no harm with his jokes and his antics read true as compared to young boys I know. This is a book that opens up a new world of truth, promises, hopes and dreams, and especially, love.

Silvia Weber was born in Abrantes, Portugal, on 20th June 1968. She started writing at the age of twelve, sending articles to newspapers and participating in school contests. Graduating in Modern Languages and Literature, her whole career was dedicated to teaching and developing the youngsters greatest potential. A wide diversity of interests took her to a life of researching and studying a variety of subjects such as Languages, Phytotherapy and painting. A strong belief in dreams took her to England at the age of thirty-nine, searching for a place to call home.

For more information, check out the official website, The Wolves Keeper Legend
Posted by Unknown at 10:18 AM No comments:

Way Back Wednesday - Circus of the Damned 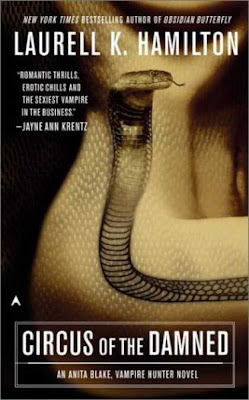 Circus of the Damned continues the adventures of Anita Blake: Vampire Hunter. Anita works to solve a series of murders by an unknown vampire pack, while fending off the advances of her would be vampire master, Jean-Claude. She is also dealing with various people and creatures who wish her to reveal Jean-Claude's identity and location.

We get to see some regular characters: Jean-Claude (naturally, this is before Anita falls in love with him), Dolph and Zerbrowski, Richard, and Edward. This is the pivotal book that sets up the love triangle between Anita, Jean-Claude and Richard. It is also the first look we have of Richard and his hatred at being a werewolf. 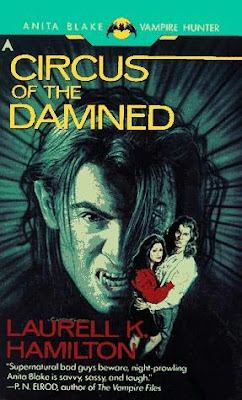 This book was originally released in paperback format, but has since been re-released in hardcover.

You can read more on Hamilton's website about Circus of the Damned
Posted by Unknown at 8:53 AM No comments: 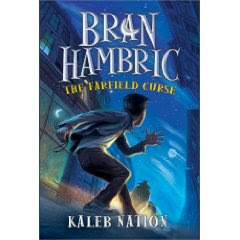 I just got my hot little hands on the most anticipated young adult book this fall: BRAN HAMBRIC: THE FARFIELD CURSE by Kaleb Nation. My advanced review copy came in the mail on Friday, and I have already drived in with both eyeballs!

"In a bustling metropolis where magic is outlawed, a six-year-old child is found inside a locked bank vault. A scrap of paper reveals his name: Bran Hambric. The child remembers nothing of his life before the vault. Only magic could have done this. But why would any mage risk breaking the law to place a child in a bank vault?

Eight years later the City of Dunce has forgotten about Bran. Even his foster parents don't seem to know he exists. But there are those who have been watching, biding their time, waiting to strike, people who know where Bran came from and why he was sent away. And they will do anything to get Bran back, dead or alive…

Welcome to a world unlike any other where the adventure of a lifetime is just beginning." (From Amazon.Com)

Check out the talented Kaleb Nation on his offical blog, KALEB NATION, or on the official website, Bram Hambric.

Book will be available September 9th, but a huge blog tour will beginning during the middle of August. Watch for upcoming reviews and interviews.
Posted by Unknown at 10:30 AM 1 comment: 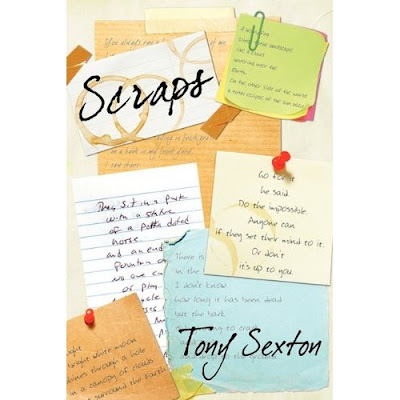 Congratulations to my good friend, Tony Sexton, for the publication of your new book, SCRAPS. Tony is the leader of The Community of Mercer County Writers and has lead several writing workshops in the community.

Many writers have said they never knew when an idea or inspiration might hit them and I am no different. Often I find myself considering an idea with no means of jotting it down. Usually I have a pen but, more often than not, I don't have a notebook handy. The only solution, in these cases, is to use what ever I can find; a napkin, box top, grocery receipt or an envelope. The title of this first collection, Scraps, comes from this dilemma. I began writing in the fifth grade when is teacher, Miss Castle, gave me writing challenge using the word “compulsion”. Since then I has spent over 20 years writing, leading writing workshops, which are designed for all ages and experiences and trying to complete her assignment. I am a member of The Community of Mercer County Writers and president elect of The Kentucky State Poetry. You can find my writing in The Journal of Kentucky Studies, Jar and several magazines including Good Old Days. I live in Mercer County with my wonderful wife, Cheryl and their dog, Mercy.


SCRAPS is available from Amazon and Wasteland Press
Posted by Unknown at 11:06 AM No comments:

... I just want to take a moment to wish my youngest daughter a

Christine Nicole was born on this date, 17 years ago at 9:10 in the morning. Even though she was 5 weeks early and only weighed 5 lbs. 10 oz., she has been the love of our life.

Happy Birthday, Sweetheart, we love you bunches!
Posted by Unknown at 10:32 AM 1 comment: 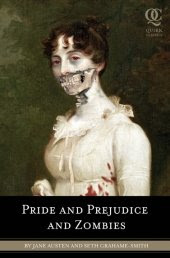 Check out Miz B's blog for a great giveaway of PRIDE, PREJUDICE AND ZOMBIES. Go check her out!
Posted by Unknown at 10:32 AM 2 comments:

Way Back Wednesday - The Laughing Corpse 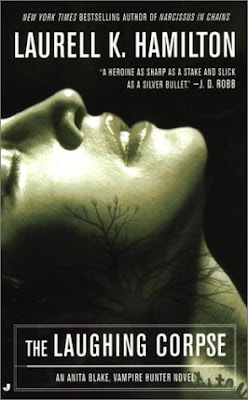 The Laughing Corpse by Laurell K. Hamilton, is the second book in the Anita Blake, Vampire Hunter series. It was originally published in 1994

In this book, The Laughing Corpse is the name of a vampire comedy club operated by Jean-Claude. In the earlier novels, Hamilton set the novels around a specific location in St. Louis. After so many fans have tried to find the actual locations in town, Hamilton stopped using specific locations.

The Laughing Corpse continues the adventures of Anita Blake, as she attempts to solve a gruesome set of murders, while while trying to avoid two potential threats to her life from people interested in using her talents as a zombie animator. 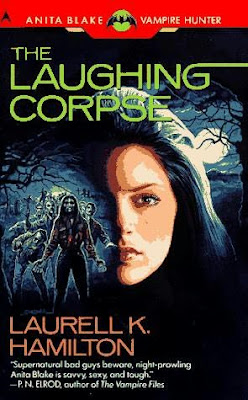 Anita is still trying to come to grips with her powers and her relationship with Jean-Claude, the vampire master of St. Louis and Anita's future lover/master. Although Jean-Claude and Anita are not together as a couple yet, the sexual tension is there and each book continues to build on this.

These earlier books also contain more scenes with Lt. Rudolph "Dolph" Storr, Anita's friend and head of the Regional Preternatural Investigation Taskforce, or Spook Squad. I have missed Anita's interactions with Dolph in the last 4 or 5 books, so it was great to reread this book and see him again. 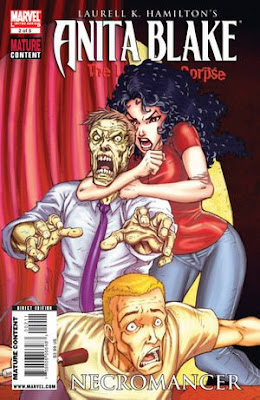 The Laughing Corpse blends elements of supernatural and detective fiction, specifically police procedural and hardboiled fiction in this novel. This book was originally published in paperback form, but has since been re-released in hardcover. This is also the second of the Anita Blake books to be turned into a graphic novel.
Posted by Unknown at 9:46 AM 1 comment: