The Slow Talk of Stones 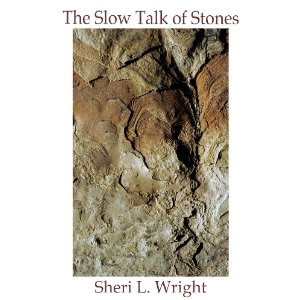 
Sheri L. Wright will make you feel a communion with Mother Nature; only to hear nature’s painful cries as the earth is slowly destroyed.
Her words are deep and dripping with visualization as she recalls mountain top removal in “Hollow Folk” and the westward movement towards their homes, “… things that will ooze themselves onto your comfort.”
The titled poem will bring tears to your eyes as Wright compares the bones of the Earth to the skin we stand on. The Slow Talk of Stones tells the truth of earth’s destruction and makes us pray for an alternative solution.
I think my favorite poem is “Mama” – the struggle and sorrow a woman goes through to hold a family together, but not conforming to typical ways. Honoring God in her own way with nature and faith, but no church and socializing. The way she feels after receiving a bushel of beans on her front porch, not as charity, but as a kindness, “I don’t hide those give-aways from the girls. I want them to know kindness.”
Wright is the author of one full length book of poetry, Nuns Shooting Guns, and three poetry chapbooks. She currently the host of “From the Inkwell,” a one hour radio show dedicated to all thins literary on CHRadio 1650, live-streaming at www.chradio.net
Posted by Unknown at 5:56 PM No comments: 
Ann H. Gabhart has seamlessly woven three generations of a family into one heartwarming, cohesive story that will keep you reading late into the night. Taking place during the depression years of the late 1930s, this story tells about the many secrets each family tries to hide. The story starts with Kate Merritt, the middle daughter of Victor and Nadine Merritt, who feels the needs to protect her family and clean up all the messes and takes the burden of caring for her family, even though she is only 12 years old. Victor and Nadine were madly in love, but several months after their marriage, Victor volunteered for the war and although Nadine begged him not to go, Victor felt it was his duty to serve his country. Victor was never the same after the war, nor was Nadine after losing their first child, but they managed to hold onto their immense love, ever though life was hard.

Victor Merritt was the son of Preston Merritt, the most powerful man in town. He ran the local store, extending miserly credit to his neighbors so they could survive during wartime. Mr. Merritt had never shown any love toward his youngest son, especially after the death of his favorite son in a drowning accident. Although we learn Mr. Merritt is actually the cause of the oldest son’s death, he must find someone else to blame, and that blame fell on Victor. From that day forward, Victor could do nothing right in the eyes of his father, from buying his own blacksmith job to raising his family. And then when the war dreams started again, Victor began drinking more and more, affecting every aspect of his life.

Nadine was the daughter of Rev. Orrin Reece, the preacher of the house on the hill. Although there have been some difficulties in the relationship between Nadine and her father, Nadine was always in church on Sunday, bearing up under the glare of her father and the sermons he seemed directed straight to her.

While all this turmoil is swirling about like a whirlwind with Kate being the center magnet trying to hold the family together, an abandoned six-year-old girl named Lorena Birdsong is thrown into the mix and Kate immediately feels protective of this girl. Even though the Merritt family can hardly support three daughters, they embrace the child as if she was always a member of the family, and try to keep one of the richest families in town from claiming the child as their own.

This book is layered with forgiveness, love and strength to keep marching through troubled waters and a growing and renewed faith in God. All the book characters face real problems as they try to hold onto what is left of their families. Even the supporting characters – Aunt Hattie, Graham and Fern – gave great consistency to this novel. I think rural Americans as well as big city readers will enjoy this book, based in a real rural area of Kentucky, although Gabhart has changed the name. This story was drawn into the imagination after Gabhart listened to the stories told by her family of years gone by. Many events are actual occurrences, but the author has taken liberties in embellishing this superb story.
Posted by Unknown at 11:30 PM 1 comment: