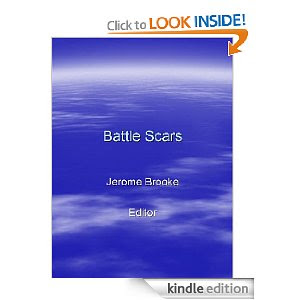 I am happy to announce, I have had a poem printed in the Battle Scars
Anthology edited by Jerome Brooke 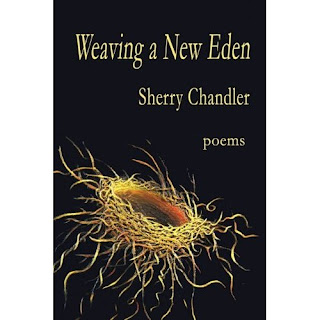 Sherry Chandler is a high caliber poet and author of two chapbooks: Dance the Black-Eyed Girl is #13 in the New Women’s Voices series from Finishing Line Press and My Will and Testament Is on the Desk is #4 in FootHills Publishing’s Poets on Peace Series. Weaving a New Eden is her first full-length book of poetry.

Weaving a New Eden takes us back to the beginnings of Kentucky, back to 1774 with Daniel and Rebecca Boone. I have lived my entire life in Harrodsburg, Kentucky, home of the first permanent settlement West of the Alleghany Mountains, founded by James Harrod, but visited by Daniel and Rebecca Boone and their family. The poems in this powerful book interrelate with the female heritage of Chandler and the frontier life faced by Rebecca Boone.

One of my favorite poems is “No More” because it reminds me of the death of my mother. Although my mother was 65 and Chandler’s was 91, the similarities of their deaths haunted me. Watching a parent, especially a mother, take a last breath is always hard, even if it comes at the end of a long illness. While many relatives may rush to claim treasures after the funeral, the last lines of this poem reverberated through me because it is similar to what I did when my own mother died:

I break a branch,
a blossom
from the hard winter pear.

“The Grandmother Acrostics” is a legacy of recollections from the women of Chandler’s past: Lettice, born ca 1774, who kept a Kentucky tavern; Lydia Simpson ca 1799, whose father kept a public house; Ambie W. True, October 1870, had seven children; Katherine B. Keith, September 1917, born weighing 14 pounds; and Chandler, February 1945, “dancing the figure of the Black-Eyed Girl.”

“Jemima Boone Speaks of Abduction, Boonesborough, July 1776” is a lyrical look at the torment Miss Boone at the hand of the Cherokees, Shawnees, who

“knew me for Boone’s child. We have done pretty well for Old Boone this time.”

“Rebecca Boone Speaks of Fidelity” starts out as,

“You should have staid home and got it yourself.”

What woman hasn’t thought this thought at one time in their lives?

At the end of this lovely book of historical poetry is a note section, letting the reader know about some of the research Chandler gathered in order to put this book together. This book is well-worth the read, especially, put not limited to, the women of Kentucky. History woven into poetry is a magical thing.

Posted by Unknown at 2:21 PM No comments: