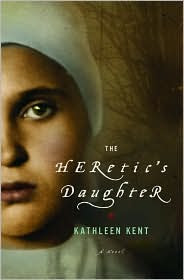 The Heretic's Daughter by Kathleen Kent

To write this work of historical fiction, Kathleen Kent had to draw from the ancestors of her past. She is a descendant of Martha Carrier, a lady hung as a witch during the Salem Witch Trials. The narrator of this story is Sarah - Martha's daughter - and at age eight, she had to proclaim her mother a witch and testify against her in court.

Kent's imagery is beautiful and powerful:

"The passage of time ... had only worked to stiffen the fabric of her being."

Sarah was raised in the harsh environment of the New World and lived a hard life working with her three older brothers and parents on the family farm. As the oldest daughter, Sarah must take over the care of her one-year old sister when the two must go live with an aunt and uncle during a smallpox outbreak. The aunt and uncle showed Sarah and her sister more love than their own parents, so much so that when Sarah had to return home, she had hard feelings toward her parents, especially her mother.

This has set the stage for the witchcraft trials to come. Kent is great at pointing out suspicious activities and the paranoid feelings of the neighbors. She also describes in accurate detail the conditions of the horrific jail were the accused were held.

The Heretic's Daughter covers a vast array of emotions from hardship and suffering to hatred and loathing to the understanding of a deep unconditional love. I have read many books on the Salem Witch Trials, but this is the first story I've read from a child's point of view. I highly recommend this book.