It's time for another TLC Book Tour. This month's book is TWO BROTHERS, One North, One South by David H. Jones. 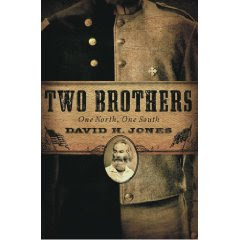 Two Brothers - One North, One South by David H. Jones

"A Civil War Novel navigated by Walt Whitman that hourneys from Baltimore before the war, to many battlefields, and to Richmond, where Hetty Cary is the reigning belle ... Walt Whitman feared that the real war would never get in the boks ... the true stories that depicted the courage and humanity of soldiers who fought, bled and died in the American Civil War ... this book helps put that fear to rest."

Although I don't normally read books about our past wars, Two Brothers: One North, One South is a different kind of war story. This books starts out in 1865 with Walt Whitman visiting wounded soilders at Armory Square Hospital in Washington, D.C. Lincoln had been assassinated and it looked like the Civil War had ended.

The two brothers in this book are William Scollay Prentiss - a Rebel soldier - and Major Clifton Prentiss - a Union soldier, but there are also two more brothers that play roles in the storyline - Dr. John H. Prentiss, Jr. and T. Melville Prentiss. Dr. Prentiss was a Union Army doctor.

Because Whitman had spent so much time with the dying William Prentiss, he was able to give the family an account of William's life with the Maryland's Confederate army. After William's death, the brothers gather with Whitman at the bedside of injured Clifton Prentiss, and they share stories of war and home. David Jones has expertly mingled facts and fiction and the reader starts to get a clear picture of the Prentiss family that goes from "perfect" to horrifying tragedy.

Because the two brothers were on opposing sides of the war, William and Clifford had not seen nor spoken to one another since the early months of the war. In a twist of fate, the brothers are wounded in a battle near the end of the war within 20 yards of each other and they both were taken to the hospital in the same ambulance.

Although this is a fictionalized story, it is very compelling and the historical facts of the book ring true. Mr. Jones has researched this historical time period and there are actual letters, diaries, newspaper articles and notes of Walt Whitman's.

I think Two Brothers: One North, One South is a book to be enjoyed by everyone, not just Civil War enthusists.

David H. Jones was born and raised in West Virginia and has been a lifelong student of the Civil War. His research took him into the swamps of Dinwiddie County, Virginia, to rediscover the lost location where a pivotal event in the book took place. A graduate of Kentucky Military Institute and Babson College, former Navy officer, and entrepreneur, he currently lives and writes in Los Angeles, California.

Links for David H. Jones and his book, Two Brothers – One North, One South

Excerpt from Two Brothers – One North, One South

Reviews of the book

Thank you so much for hosting "Two Brothers: One North, One South" on your blog. I appreciate this opportunity and your nice review. It was my hope in writing this book that its readership would extend beyond Civil War buffs (although I'm delighted to know that many have enjoyed it) as I believe that just about everyone can find meaningful things in story of the Prentiss brothers. Thanks again.