Burnt Offerings is the 7th in the Anita Blake: Vampire Hunter series by Laurell K. Hamilton.

Burnt Offerings continues the adventures of Anita Blake, as she attempts to solve a series of arsons and other crimes, and deal with a threat to one of her lovers, the vampire Jean-Claude, as he fends off a political challenge from the Vampire Council. Anita must also balance her romantic life with her roles as supernatural police consultant, vampire executioner, zombie animator, human servant and lover to the vampire Master of the City and Richard, the Ulfric of the local werewolf pack.

This is the book were we discover Anita has developed 3 new powers. She was able to raise 2 vampires (like she does the zombies), when she accidentally raises Damian and Willie. She now has the ability to cause harm from a distance with a slashing attack similar to some vampires. We also get another glimpse of Raina when Anita is able to call Raina's munin (sexual energy) to heal wounds or cause harm. 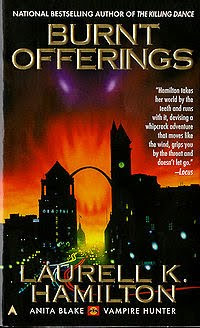 i must order this series from the library and start reading it ;0)