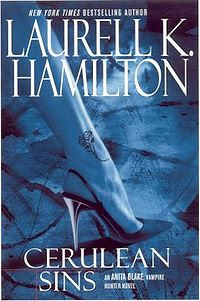 Cerulean Sins is the 11th book in the Anita Blake: Vampire Hunter series by Laurell K. Hamilton and was published in 2003.

Continuing the adventures of our favorite necromancer, Anita continues to try to bring some order to her personal life, while simultaneously confronting a power play by Jean-Claude's vampire master, Belle Morte and attempting to solve a series of brutal killings by an unidentified shapeshifter.

Anita is happily living with newcomers, Micah and Nathaniel, while simultaneously dating Micah and Jean-Claude. She is contacted by a professional assassin who wants Anita to reanimate one of his ancestors to assist in genealogical research, but this is only his cover to get closer to her. Elsewhere, Jean-Claude is unpleasantly surprised by an early visit from Musette and her entourage, all of whom are representatives of the founder of Jean-Claude's bloodline, Belle Morte and represent an attempt by Belle Morte to test and possibly punish or capture Jean-Claude and his followers.

Asher is front and center in this book and more of his storyline is coming into focus. Richard is still mostly absent from this book, but it looks like he is finally over his self-destructing ways. Dolph and Zerbrowski are present again, helping Anita track down the shapeshifting serial killer, who turns out to be a werewolf member of the mercenary team sent to watch Anita herself. Oh, what a tangled web we weave ...

The meaning behind this book title is not clear, but may refer at least in part to the sheets in Jean-Claude's bed, which Anita refers to several times as cerulean blue in this novel. It may also refer to Asher's eyes, which Anita describe as cerulean blue, seeing as the novel has a very Asher-oriented plotline. It was at one time suggested by Hamilton that "Cerulean Sins" was the name of another of Jean-Claude's businesses, a store dealing in lingerie and other 'adult' products, but this was deemed too racy for the books and eliminated before publishing.

This is one of my favorite books of the entire series.
Posted by Unknown at 9:23 AM