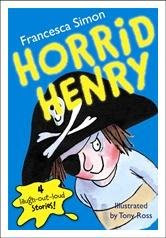 And so begins the horrid tales of Henry. As a mother who enjoys reading "The Adventures of Captain Underpants," I jumped at the chance to read this funny children's series. A #1 best-selling chapter book series in the UK, "Horrid Henry" is written by an American author, Francesca Simon, and is illustrated by Tony Ross.

The first 4 books in this wonderful series are being released this week in the United States and are expected to be as popular as they are in the UK. Elementary school age children, and their parents, should love these books, and the easy to read print and words make these the perfect first reader chapter books.

Horrid Hentry invents a time machine and promises to send his brother, Perfect Peter, to the future (as soon as Peter puts on one of Mom's dresses). But when Peter gets there, it isn't exactly what he had in mind In fact, evertying kind of looks the same ..."

Following the tale of Horrid Henry's little brother, Peter, I was laughing out loud at both boy's antics. Poor Perfect Peter, having to put up with a brother like Horrid Henry. This time he swears Henry will never trick him again.

My daughter and I loved these. Henry is a riot, and I'm glad I don't know anyone like him in real life. :)

--Anna
Diary of an Eccentric

I work for the online marketing team at Random House Children’s Books. We have recently launched a new series called Gargoylz, which we think fans of Horrid Henry will love! Packed with mischief, mayhem and magic, Gargoylz follows the adventures of naughty schoolboys Max and Ben, and their cheeky gargoylz friends. Gargoylz are wacky little monsters that are super sneaky, super naughty and have super powers too!
Find out more about the books and meet the Gargoylz at www.gargoylz.co.uk