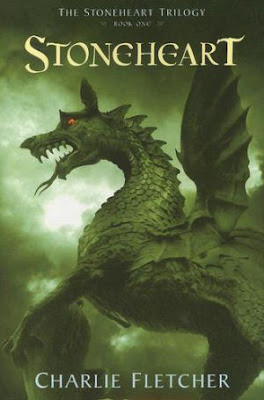 "On a school trip to the Natural History Museum in London, a 12-year-old loner named George is banished for something he didn't do. Angry, he lashes out and breaks off a dragon's head carved onto the wall of the museum. Next thing he knows, a pterodactyl carving comes to life and begins to chase him."

And so begins George's adventures in "unLondon." He is soon chased by many fanciful creatures come alive from stone statues. He first encounters Gunner, a statue of a World War I soldier, who helps to save the boy from the pterodactyl. The pair soon meet up with Edie, a "glint" with the power to see the past.

In order for George to go back to the London he knows, the London where stone statues don't come to life, he must return the broken dragon's head to the Stone Heart. Gunner and Edie, plus a cast of other characters, help George in achieving his objective.

In the beginning of the book, George is feeling sorry for himself because his father is dead and his mother barely has time for him. Edie is portrayed as a cold-hearted survivor who has always looked after herself. But during the course of their adventures through the unusual streets of London, their characters start to evolve.

Some of the other interesting characters from the book are the Sphinxes who only give answers in riddles, the Clocker who continually marks the time, the Black Friar who tells them where the Stone Heart is, the Walker who is pure evil incarnate and the Minotaur who is part bull, part human and all bad. We also get glimpses of dragons and gargoyles. Fletcher has turned a collection of the actual statues around London into an astonishing assortment of personalities and monsters.

Although marketed to children and young adults, I don't think I would recommend this for younger children mainly because of some of the scary and dangerous situations George and Edie encounter, but I highly recommend it for older children and teenagers, as well as adults like me who love young adult books. This is the first book in the Stoneheart Trilogy and as soon as I put the last period on this post, I'm ready to start Ironhand, the next book in the series. The final book is entitled Silvertongue.

Charlie Fletcher is a British author and screenwriter. Stoneheart was shortlisted for the Branford Boase Award in 2007. There is a movie in development for release in 2010.
Posted by Unknown at 7:16 AM

I have the first two of this to read and I am really looking forward to them. I am waiting for book three to come out in a couple of months before I get stuck in.

I've read all three of these books-they're amazing! I don't think that they're very well-known. Your article was a fun read! I haven't heard of a movie, I must investigate further!