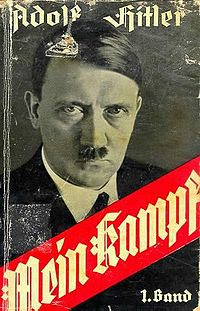 My youngest daughter has a thirst for historical knowledge like no other 16 year old I've ever met. She must have inherited this gene from her dad, because despite the random knowledge crowding my brain, I've never had an intense desire for history.

Last night she came home from a shopping trip to Lexington with a friend and she literally bounced through the front door.

"You'll never believe what book I found!" Well, of course, I could have guessed all night because her wish list of books is probably twice as long as mine.

"I found "Mein Kampf" - can you believe it?" For those of you who don't know, "Mein Kampf" is a book dictated by Adolf Hitler. The title translates to "my struggle" and it is an autobiography of Hitler's political ideology. She has been wanting this book for over a year now.

"You don't think I'm a Nazi, do you?" I had to laugh because she was so serious.

My daughter, she is truly a unique individual.

Maybe I can talk her into doing a review after she reads the book...
Posted by Unknown at 9:22 AM

I'd be very interested to see what she thinks of Mein Kampf. My husband has a copy somewhere, I swear I've seen it, but neither of us has read it.

Knowledge is power--I think we should encourage others to read as much as possible and make their own judgments. To ban or hide a book like Mein Kampf gives it more power, and also denies people (like your daughter) the chance to see what a stupid, evil work it is.