Way Back Wednesday - The Lunatic Cafe 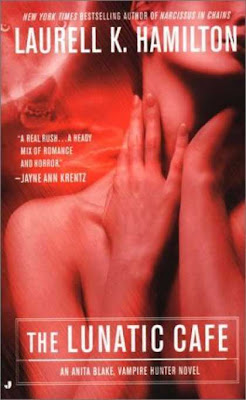 The Lunatic Cafe is the 4th book in the adventures of Anita Blake, Vampire Hunter. Anita attempts to solve a series of shapeshifters disappearances at the same time she is examining her relationship with Richard - her werewolf boyfriend, and avoiding the advances of Jean-Claude - master vampire of St. Louis. Like the first 3 books in the series, The Lunatic Cafe blends elements of supernatural, hardboiled and police procedural fiction.

The Lunatic Cafe picks right up where Circus of the Damned left off. Anita is out on a date with Richard when she learns he is not only a shape shifter, but the Alpha werewolf of the local pack. This is the book where we are introduced to the mentally unstable Raina, a rival werewolf who is also a sexual sadist. Raina will come back to haunt Anita in future books.

Because this is an earlier book, we get to see some of my favorite recurring characters: Edward, Dolf, Zerbrowski, Ronnie (Anita's best girlfriend), and Jason. As with earlier novels, the "Lunatic Cafe" is the name of a restaurant operated by the St. Louis area shapeshifters, as Hamilton continues naming the novels after a fictional location within each book. 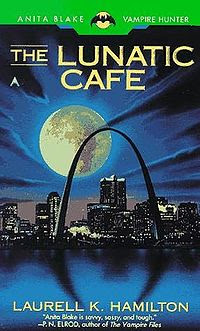 Like the first 3 books, The Lunatic Cafe was originally released in paperback. With the growing succes of the Anita Blake series, the early books have been re-released in hardcover.
Posted by Unknown at 12:02 AM