Zig Zagging Down a Wild Trail 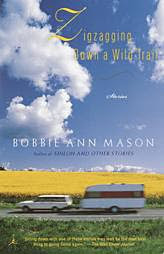 Zig Zagging Down a Wild Trail by Bobbie Ann Mason

I love Kentucky authors and Bobbie Ann Mason is one of my very favorites. She is the award winning author of Feather Crowns, Shiloh and Other Stories and In Country, to name a few. Her short story collection, Zigzagging Down A Wild Trail, contains 11 stories that will thrill readers of her works, as well as draw in new readers to her unusual writing style. Many of the stories are set in Eastern Kentucky, Mason’s native homeland.

In Tobrah, a single childless woman - Jackie - inherits her five-year-old half sister she didn’t know existed. Through the Tobrah, Jackie reconnects with her inner child and discovers a part of the father she never knew before.

In With Jazz, twice-divorced Chrissy is dealing with her adult children’s problems and the failures of her past relationships. Yet, Jazz offers an uncomplicated love with no ties and a lot of heart.

Three-Wheeler proves that freedom comes to people in many different forms. Mary inherits her uncle’s Kentucky home and works on her pottery. Two young boys in need of money offer to move a pile of dirt for her. The small chore grows and grows, till they discover the three-wheeler, which would make their job easier. Battling nosey neighbors and little boys, Mary takes the three-wheeler on the trail and dreams of her days in New Mexico.

In Charger a young man is in love with Tiffany, a girl in snake pants. Charger is battling depression, afraid that he and Tiffany will end up like his parents, who married young then grew apart. Charger’s father abandoned his family in Kentucky to run off to Texas. Believing he will only find happiness in Texas, Charger turns a short road trip into a journey of the spirit to Texas – only to become grounded in Tiffany’s love.

The Funeral Side has Sandra McCain returning to care for her father after he suffers a stroke. The family lived on the second floor, above a furniture store and the funeral home. The funeral side is closed until the death of a family friend. This event opens old wounds for Sandra of her mother’s death, but she awakens to her father’s love and the ritual of community as they celebrate death.

In Thunder Snow, Boogie, whose wife, Darlene, left home to serve in the Persian Gulf war, worries that she held herself separate from him so that there was an essential part of her he could never reach.

In Rolling into Atlanta, a young woman searches for the kind of authenticity she remembers from her rural childhood. In Proper Gypsies, Nancy deals with the shock of being robbed in London.

Mason's stories are not about unusual events, but she takes a different perspective on the normal everyday life. Her characters are generally people many will know some version of, and yet her descriptive prose makes you feel as though each character is new.

Bobbie Ann Mason won the PEN/ Hemingway Award for Shiloh and Other Stories, and the Southern Book Award for Feather Crowns (one of my favorite books) which was also a finalist for the National Book Critics Circle Award. Zig Zagging is a good read and one I would recommend if you have a desire to read stories of a rural nature.

Post Script: This book was released in hardback in 2001, and I was fortunate enough to meet Bobbie Ann Mason at a book signing in Lexington, Kentucky. In addition to autographing my book with a personal message, she was also kind enough to autograph a rock for my rock collection. For regular readers of my blog, you know I'm a rock collector and I love getting rocks autographed.
Posted by Unknown at 1:20 PM