Way Back Wednesday - 'Twas the Night Before Christmas

I am again interrupting Trixie Belden Mysteries on Way Back Wednesday for another favorite Christmas book. This one should be familiar to everyone, because it has been around since 1823. 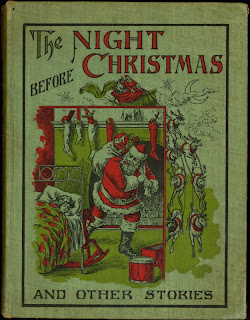 A Visit from St. Nicholas (also known as The Night Before Christmas and 'Twas the Night Before Christmas from its first line) is a poem first published anonymously in 1823. Authorship was later attributed to Clement Clarke Moore and the poem was included in an 1844 anthology of his works. There is still controversay in the literary world as to whether Moore is the actual author of this classic poem.

A Visit from St. Nicholas is largely responsible for the conception of Santa Claus from the mid-nineteenth century to today, including his physical appearance, the night of his visit, his mode of transportation, the number and names of his reindeer, and that he brings toys to children. Prior to the poem, American ideas about St. Nicholas and other Christmastide visitors varied considerably. The poem has influenced ideas about St. Nicholas and Santa Claus beyond the United States to the rest of the Anglosphere and the world. 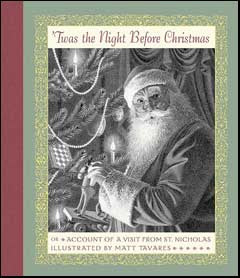 There are so many versions of this wonderful book on the market, it would be too hard to list them all. This cover is the closest one I could find to the actual book my family owns. This classic story is a "must have" for families with small children or grandchildren, or for adults who are still young at heart.

We listened to Bob Dylan reading this on his show on Sirius radio on Monday night. It was the best reading I have ever heard. It made me smile.