Way Back Wednesday - The Wonderful Wizard of Oz

For the last few months, I have been featuring Trixie Belden Mysteries on my Way Back Wednesdays. These were my favorite books as a child.

After receiving the Annotated Wizard of Oz for Christmas, I have decided to feature a few of the Oz sequels during these posts. Many people are not aware that there are 14 Oz novels written by L. Frank Baum. There are several dozen other Oz books written by authors after Baum's death.

So, welcome to Way Back Wednesday - The Wonderful Wizard of Oz 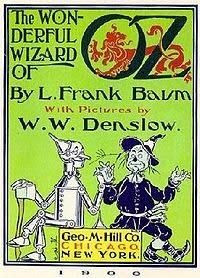 The Wonderful Wizard of Oz by L. Frank Baum has always been one of my favorite books. Most people are familiar with the MGM movie starring Judy Garland, but the fascination started for me the first time I read the book.

There are several things that were changed for the movie so there are many facts people get mixed up.

1.)There is no Ms. Gulch in the book. As a matter of fact, there is very little mentioned of the Kansas farm in the book - this was added for the film. 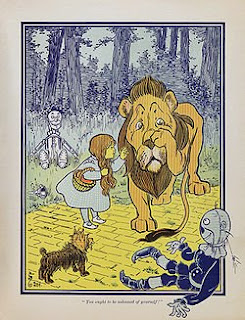 3.)In the book, Dorothy is protected from harm by the golden kiss the Good Witch of the North places upon her forehead.

4.)The origins of the Tin Woodman are glossed over in the movie, so we don't know that he actually a human who cut off his on arms and legs, and then tinsmith made replacements.

5.)There is no mention of the Golden Cap, the Hammer-heads, or the Kalidahs in the movie. Want to know what they are? You need to read the book!

6.)And the most significant difference between the book and the movie - Dorothy's slippers are silver, not red! They were changed for the movie to take advantage of the new technocolor.