Way Back Wednesday - A Christmas Carol

I am interrupting Trixie Belden Mysteries on Way Back Wednesday for another favorite Christmas Classic. 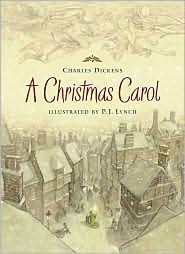 Originally entitled A Christmas Carol in Prose, Being a Ghost Story of Christmas, the book commonly known as A Christmas Carol is what Charles Dickens described as his "little Christmas Book" and was first published on December 19, 1843 with illustrations by John Leech.

A Christmas Carol is a Victorian morality tale of an old and bitter miser, Ebenezer Scrooge, who undergoes a profound experience of redemption over the course of one night, which if it doesn't change his ways he will end up like his friend Jacob Marley, walking the Earth forever, being nothing but invisible and lonely. Mr. Scrooge is a financier/money-changer who has devoted his life to the accumulation of wealth. He holds anything other than money in contempt, including friendship, love and the Christmas season.

Through the medium of movies and television, A Christmas Carol is a common holiday theme with numerous versions. There are also unabridged and abridged versions of the book, in addition to annotated versions.

This is a book I used to read to my children every Christmas. We would start a week before Christmas and I would read a few chapters every night. This is still one of my favorite books. As a college student in the late 1980s, I wrote a dissertation on Charles Dickens and A Christmas Carol

i've often thought of getting this book.. i just wonder if i can enjoy both the book and the multiple versions I will see on television?

I love that book and all the television variations!!

Wow, think of writing a "little" Christmas story and having people still be reading it and loving it over 150 years later.

I love this story. We love this story. We, too, read it aloud for years. And if they all (kidz and their SOs), we'll read it in a sitting - oh, yes!
Thanks for giving this one kudos. The writing is nearly as rich as a baked custard or plum pudding!