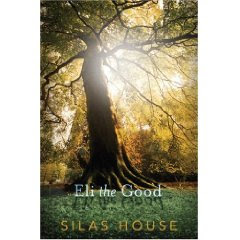 Eli the Good by Silas House

Bicentennial fireworks burn the sky. Bob Seger growls from a transistor radio. And down by the river, girls line up on lawn chairs in pursuit of the perfect tan. Yet for ten-year-old Eli Book, the summer of 1976 is the one that threatened to tear his family apart. There is his distant mother; his traumatized Vietnam vet dad; his wild sister; his former war protester aunt; and his tough yet troubled best friend, Edie, the only person with whom he can be himself. As tempers flare and his father’s nightmares rage, Eli watches from the sidelines, but soon even he cannot escape the current of conflict. From Silas House comes a tender look at the complexities of childhood and the realities of war — a quintessentially Southern novel filled with music, nostalgic detail, a deep respect for nature, and a powerful sense of place.

Silas House is the bestselling Kentucky author of CLAY'S QUILT, PARCHMENT OF LEAVES and THE COAL TATTOO - all centering around several generations of the same family growing up in the hills of Eastern Kentucky. With this book, Silas tries his hand a writing for young adults and he has ended up with an endearing look at a slice of life from the summer of 1976.

Eli Book is a ten year old boy, living like most children of the 1970s - riding his bicycle all over town, splashing in the town creek and enjoying hot summer days with his best friend Edie. This is really the coming of age story of how Eli deals with the overwhelming situations of strife in his young life.

Eli has undying love for his parents, Loretta and Stanton Book, but his growing curiosity of the secrets they both carry is threatening to eat him alive. Eli feels jealousy of his mother's unconditional love for his father - he wants to be the number one love of her life. Eli is filled with uncertainty and longing to understand his father's past as a Vietnam veteran and the nightmares that consume his dreams.

There is also underlying tension from Eli's sister, Josie, as she comes to grips with the fact that her mother was pregnant with her before Loretta and Stanton were married - she is not Stanton's biological daughter, but he has raised her as such. Then there is Stanton's way-ward, wildflower of a sister, Nell, who comes to live with the family for the summer. Stanton has unresolved feelings for his little sister because he feels betrayed that she was a war protester.

And then there is Edie, the sweet little girl from next door who has been Eli's best friend and confidante. Their friendship is pure and an accurate portrayal of childhood innocence of past decades. But she has family problems of her own and leans on Eli's family as her support system.

This is a book full of emotion and House's stylized lyrical prose. The words drip off the page and you want to lap them up, savoring every last drop and flavor. He has successfully written a compelling story that will not only capture the hearts of the intended young adult audience, but will hold an equal place in the hearts of adults. This is a must-read for anyone who enjoys a great story and is destined to become a classic.

I just tweeted this review. I love your "share" button! Thanks for joining in the book review link-up. I always enjoying reading your reviews. Great job!

This sounds excellent - I will have to add this one to my list. Thanks for sharing your review.

I'm reading this now and just loving it. I think part of the reason is that I was a teenager in 1976 so every song mentioned is familiar. I already have the soundtrack to this book in my head.