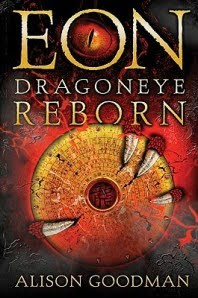 From Amazon: In this Asian-inspired fantasy world, political power belongs to the emperor, but also to the Dragoneyes: men who harness the power of the 12 energy dragons named for animals from the Chinese zodiac. Each year, a new one comes to power, and the dragon itself chooses a new apprentice from a pool of 12-year-old boys. Physically lame Eon is thought least likely to be chosen and also has a secret: Eon is truly Eona, a 16-year-old girl. At the ceremony, the Rat Dragon chooses fellow trainee Dillon for the role of apprentice. Eon thinks that all is lost until she sees a dragon no one has seen in 400 years: the Dragon Dragon—also known as the Mirror Dragon.

Eon: Dragoneye Reborn is a great work of fiction in the same vein as the J.R.R. Tolkein books. It is a well written story weaving together Chinese horoscopes and dragon lores with political intrigue and gender bias. The characters are well rounded and fully developed and the plot is intricate and full of vivid visual imagery.

The main character is a 12 year old boy named Eon who is guarding a secret that could cause his death if it were to be revealed. But Eon is actually a 16-year-old girl, Eona, disguised by her master in a last-gasp attempt to regain his status as a dragon lord. Eon has a physical deformity in his hip from an "accident" during his youth. He has become the heir and last hope of his master, the Tiger Dragoneye. The story follows Eon's struggles as he faces a mixture of medieval and mystical challenges.

Eon is one of 12 candidates vying to be the new ascendant of the Rat Dragon. However, during the contest, Eon is not the one chosen by the Rat Dragon. Instead she is chosen by the long-missing Mirror Dragon - the only female dragon - who is making her first appearance in 500 years. All the other dragons bow to the Mirror Dragon, making Eon, or Enoa, the most important person in the kingdom after the Emperor. But the new Rat Dragoneye, Lord Ido, is not happy about the ascension of the Mirror Dragon because it interferes with his planned take over of the empire.

I was in awe of the unusual friendships of Eon and with the strong bonds of trust for each of these. There is Rilla, his body servant; Chart, the disabled son of Rilla; Lady Dela, a transgender male living as a female; and Prince Kygo, the oldest son and heir of the Emperor.

For me, this book has it all. There is betrayal that leads to great pain and anger in the midst of sorrow. There is the recovery and heroic measures of the main character and a move toward a common goal. Then there are the dragons and the power these dragons give to the dragoneye.

The first book in this duology was originally published under the title The Two Pearls of Wisdom in Australia and the U.K. Goodman is at work on the final book of this 2-book series.
Posted by Unknown at 10:54 AM