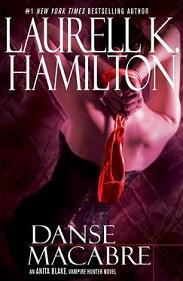 Danse Macabre is the first book where Anita's job as a Federal Marshal or her job as a zombie animator plays no part of the story. This story has Anita juggling a series of problems arising from her own increasing power, Jean-Claude's vampire politics and her own personal life.

And then real-life seems to catch up with Anita as it becomes apparent that she may be pregnant. Oh what a tangled web we weave - because of Anita's increased need to feed the ardeur with sexual energy, the line-up of "baby daddies" starts to grow: Richard (here on again/off again boyfriend), Nathaniel (her own little snack cart), Jean-Claude (her number one main squeeze), Asher (still trying to find a definition for Asher), and Damian (her vampire servant). Of course, I have conveniently left out Micah, her new live-in love, but then again, Micah is sterile. One less man to worry about!

I don't want to give away any details, but this books involves a few of the major players of this series: Belle Morte and The Mother of All Darkness being the most prominent. We also get some background on Stephen and Gregory's past lives, see Regina rear her metaphorical head and meet an actual vampire named Merlin. All in all, this book is great fun!

The book title - "Danse Macabre" - comes from several sources. One is the name of the vampire ballet company that performs during the course of the novel's events. Two can be the general "vampire politics" that serves as the central conflict - i.e., "danse macabre", or "dance of death." And three, "Danse Macabre" is also the name of a vampire-themed nightclub owned by Jean-Claude, although the nightclub appears only briefly at the end of the book.
Posted by Unknown at 8:11 PM