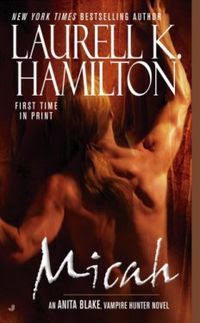 Although technically the 13th book in the series, this is not a full-length Anita Blake book. In Hamilton's words, this is a "novel-lite" book and represents a side-adventure starring Anita and Micah.

Rather than follow up immediately on the various plotlines left open in the previous novel, Incubus Dreams, Hamilton has written a much shorter work focusing primarily on Anita's relationships with one of her lovers, the eponymous Micah Callahan. Specifically, Anita is called to Philadelphia to perform an zombie animation and takes Micah on the trip. While in Philadelphia, Micah and Anita have sex, discuss their relationships and his earlier traumas, and encounter some strange twists in Anita's assignment.

Of all the books in the series, Micah is my least favorite. Although it is a good story, I'm used to having a 500 to 600+ page book to read.

Anita travels to Philadelphia on short notice to substitute for Larry Kirkland, who must remain in St. Louis because of complications in his wife Tammy's pregnancy. Although the assignment - reanimating a recently deceased federal witness in order to testify in an organized crime investigation - initially seems routine, Anita quickly begins to suspect that there is more to the case than she and Larry have been told.

Anita also continues to deal with her personal relationship with Micah, who accompanies her on the trip. Anita must come to terms with Micah's decision to reserve a nice hotel room for the two of them without telling her. She also tries to help Micah get over the trauma of narrowly surviving a wereleopard attack that left several members of his family dead.

This is a must-read for Anita fans, but just be warned - this is a paperback book and it is not an "in depth" book like the rest of the others.
Posted by Unknown at 4:38 AM